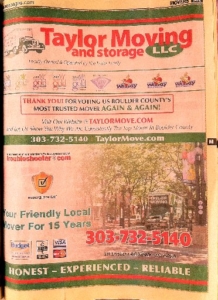 This ad, which appears in the Superpages, is for Taylor Moving and Storage LLC. The company s owner claims a competitor s ad on the next page infringes on his trademarks.

The owner of Boulder’s Taylor Moving and Storage is preparing to file a federal lawsuit against a competitor who he says intentionally copied his business — including the name, slogan and truck color — in retaliation for refusing to sell him his moving company.

Glen Taylor alleges Boulder businessman Michael Voigt has been relentless in trying to take over his company — a charge Voigt denies.

Taylor said the dispute began several years ago after Voigt moved to Boulder from California and bought Pride Moving & Storage. Voigt also bought the Boulder Valley Transfer moving company, which had been a competing business.

Read more on the Daily Camera